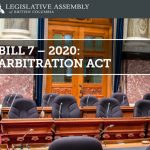 The proposed new Act contains provisions similar to those in the International Commercial Arbitration Act passed in 2018, which in turn largely followed updates to the United Nations Commission on International Trade Law (UNCITRAL) Model Law in 2006 and recommendations by the Uniform Law Conference of Canada. In an official News Release issued following introduction of the new Act, the BC Government states the Centre “maintains a unique and prominent position in the Arbitration Act as the ‘designated appointing authority’.”

While the previous version of the Act provided that the Domestic Commercial Arbitration Rules of the Centre would apply to the conduct of domestic commercial arbitrations unless parties agreed otherwise, the Act  eliminates reference to particular rules but requires that certain matters be dealt with by a “designated appointing authority”. It is understood the Centre will be named by regulation as the sole designated appointing authority.  Under the new Act, the parties can still continue to use the Centre’s Rules and have the Centre administer their arbitration.  The Centre is revising its Rules to harmonize them with the new Act and to continue to provide parties with the unique advantages of having Centre-administered arbitrations.

As the designated appointing authority, the Centre will be able to appoint an arbitrator if the parties are unable to agree on one, direct the arbitral tribunal to deliver an award on terms if there is a fee dispute so that arbitrations may be brought to a conclusion, and summarily determine payable fees and expenses of an arbitrator if there is a dispute.  A determination of the Centre may not be questioned, reviewed or restrained by a procedure under the Judicial Review Procedure Act, except where otherwise provided in the Act, thereby protecting the independence of the Centre in the exercise of its statutory authority, and limiting the role of Courts in arbitrations.

Established in 1986 in conjunction with Expo ’86 to help establish British Columbia as an international centre for finance and business, the Centre offers timely, efficient and cost-effective alternatives (arbitration and mediation) to the often back-logged Court system.  Services offered include an expert and experienced roster of arbitrators and mediators, helpful staff to assist with administrative and procedural questions, trust accounts to securely hold funds for the parties, meeting rooms to conduct hearings, booking of court reporters and translators, and other concierge services.

The Canadian International Internet Dispute Resolution Centre (CIIDRC) was established in 2019 as a new division of BCICAC, to administer internet domain disputes for the International Corporation for Assigned Numbers and Names (ICANN). This is in addition to Centre’s role over the past 16 years in administering “.ca” domain name disputes for the Canadian Internet Registration Authority (CIRA).